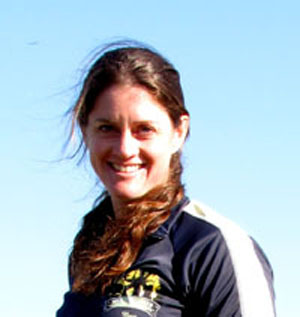 Melissa Witmer is the mind and body behind The Ultimate Athlete Project, a fitness program designed specifically for Ultimate performance. She has graced us with her fitness and training knowledge on this blog already, and so we were happy to finally catch her for a more thorough interview.

We sat down with her ahead of the Ultimate Athlete Project’s reopening this week to find out more about Melissa herself, her journey through fitness, the UAP, and a brief look at the boatload of other projects Witmer is involved in.

Had you done strength and conditioning work before you started playing Ultimate? And when did you first partake in fitness for Ultimate?

Like many players in the US at the time, I started playing when I got to university. That was in 1996 at Virginia Tech. I was introduced to strength training in high school with the girls field hockey team. I loved it and continued strength training as a normal part of my fitness routine even before I started training for ultimate. It wasn’t until much later that I made the transition from playing ultimate to stay in shape to training for ultimate.

I started to train for ultimate when I was in graduate school. I left my PhD program in chemistry with no backup plan and decided to just pursue all of the things I loved for a year or two. I got a masters in kinesiology and made a first pass at applying what I was learning to getting better at ultimate. In graduate school the training I was doing was not tailored to athletic performance in the way it is now. I made the most progress in understanding how athletes train after school, when I was in my thirties and decided to give myself one more shot at playing elite level club.

I devoted a lot of time from 2010-2012 to studying how professional athletes actually train. This studying was much more specific and much more in-depth than the learning I did in school. I also had the benefit of working at a center where american football players prepped for the NFL combine. My exposure to professional athletes and the programs they were doing confirmed much of what I had learned. Of course, experimenting on myself was the most convincing confirmation. Despite doing less work, I got far more out of my body athletically in my mid-thirties than in my mid-twenties. It wasn’t even a close comparison.

The main difference is in the focus and timing of training sessions. It’s difficult to understand what a profound difference proper planning makes until you experience it for yourself. The difference in philosophy is to plan training sessions for maximal adaptation, not maximal output. This causes some difficulty for us because when some athletes begin The Ultimate Athlete Project they have the misconception that it’s too easy. Anyone can make a workout hard. But not everyone can plan your schedule so that you adapt to training consistently over a long period of time. The UAP puts a high priority on being efficient and effective with time spent on training. We put zero priority on making sure the workout or the training schedule “feels hard.”

What was your main goal in starting the UAP?

The Ultimate Athlete Project was built to improve the way that players train for ultimate. Ultimate players were already putting time into training. But by not understanding how to train for athletic performance rather than general fitness, they were leaving a lot of athletic potential untapped.

The Ultimate Athlete Project is not the 100% perfect solution. The gold standard is to work with a strength and conditioning coach (not the same thing as a personal trainer!) over a period of several years.

What I am doing is providing a system that will get players far closer to athletic performance training then they currently are. I provide an effective, practical solution that is about a tenth of the price of a personal strength and conditioning coach.

In your experience, where do athletes who design their own fitness plans often go wrong? What aspects do they over and under emphasize?

But the biggest problem is really not having a plan. Players have very little idea of how to approach long term planning, and why should they? It’s hard. That’s why people spend multiple years studying the topic of strength training. What The Ultimate Athlete Project does best is to tell players exactly what to do and when to do it. So they can focus on training and on all the other things they need to worry about to become better players.

The UAP is customizable to a specific athlete’s needs, and caters to any level of players (no previous fitness experience required), but how does that work? How is this fitness program able to work for the variety of athletes it caters to?

The UAP is a system built on solid scientific principles. Not many ultimate players have had experience with a strength and conditioning coach writing an individualized program. So despite being at various levels of play, most ultimate players are relatively new to athletic performance training. This is why the UAP works for almost everyone. In fact, it tends to work best for those who have the most strength training experience. Experienced athletes are already used to putting in training time. The UAP directs that effort in the most efficient direction.

I would not say that it is customozable to a specific athlete’s needs. It is customozable to various schedules. The UAP by itself is not individualized training. If an athlete wants some extra attention or modifications due to an injury history, we provide the option to pay for consulting with Ren Caldwell of Ren Fitness. She is familiar with the UAP programming and is excellent at helping players sort through movement pattern problems. Ren and I are huge fans of each others work and it’s an honor to have her hanging out in the UAP, answering member questions when she can, and helping players with individualization when they need it.

Subscription to the UAP opened on Monday the 9th of October. Why is subscription opening at this time, and only open for a limited period?

In the past the UAP has been open for a week at a time during various opening windows. The reason we close is that we need players to understand that the UAP is a long term plan. We do not want players signing up 8 weeks before their season begins. Having everyone join at the same time has helped us to handle the customer support issues that come with managing a large group of people. It has been helpful to have people get started on the program together.

This year we’re doing things differently. We will leave the UAP open for several months. We hope this will allow people to sign up when they are most ready to begin training. The UAP has more help on board this year to take care of ongoing customer support. We hope this change will be beneficial to everyone. We may close at the end of February to again when most players are close to in season.

You first launched the UAP in 2011, how has the program evolved since then?

The principles behind athletic performance training have not changed dramatically since 2011. The UAP is committed to using scientifically validated training methods whenever possible. We won’t change every year depending on what new piece of equipment is fashionable at the time. Every year we make improvements that either make the UAP easier to use or that help our athletes better understand the principles behind the training. We try various experiments each year to see what our athletes find most helpful.

Our latest and upcoming changes are about providing modules that athletes can use to slightly tailor their programming. For example, last year we provided conditioning modules specific to beach ultimate. This year we will provide substitute SAQ and conditioning modules for those who are playing indoor over the winter. We may do a module specifically for those who want to work on their running form. We have other ideas and will be consulting our members for more.

Our biggest innovation on the horizon is the UAP app which will allow athletes to log their workouts on their phones. This project is still in the beginning phases so we don’t want to promise too much. Our long term goal is to help our athletes use their own data to drive better adaptation to training. That’s more like a five year project. Right now we’re happy if the app makes the program easier to use by making it fully functional on mobile.

You’re very well known for your work on Ultimate fitness with the UAP, but that is not the limit of your contribution to Ultimate specific knowledge. What other projects are you currently working on?

Our newest adventure is The Ultimate Skills Project. Like The Ultimate Athlete Project, the focus is on providing players with things they can do to improve their playing. I have brought in some of the best ultimate coaches in the world to create skills modules that players can work on in 1-2 hours per week by themselves or with a partner.

For anyone who has wondered what the difference is between intermediate players and the elites, The Ultimate Skills Project is where you can get that level of focus and detail.

Outside of the US, we are better known for our coaching resources in the Ulty Results Coaching Academy. Every year since 2013, we’ve brought the best ultimate coaches together for a yearly online conference. And we’re building a small but very dedicated group of global ultimate coaches in our URCA Classroom. For those who want a taste of what we offer, we’ve just put together a package of some of our best URCA content from the past few years that covers the breadth of what a coach should know about the game.

Melissa, thank you so much for your time.

The Ultimate Athlete Project provides a complete strength and conditioning program designed with athletic performance for ultimate in mind. Choose a plan from 2-6 hours per week of training and peak at the time you want to perform best.

The Ultimate Skills Project provides skills training you can do in 1-2 hours per week. Choose the skills you need to work on and work at your own pace.