Here at TOKAY we are really into cleats. Join us for a look back at the fascinating history of cleats.

Although cleats had been around for over 400 years, it was not until the late 1940’s and the end of the Second World War that cleat development truly hit its stride. Post-war design, material, and technological developments revolutionized cleats thus boosting footwear performance further than ever before.

The Upper Gets Lower

Cleat development up until the 1940’s was focused largely on the sole of the shoe. But with the end of World War II upon us, the upper finally got its chance at significant change and improvement. The upper being the part of the shoe on top of the foot.

The global nature of soccer was a major factor in the upper’s development. As air travel became more affordable, international matches became more common and the world at large was impressed by the agility and footwork of South America’s players. These players favoured a more slipper-like shoe, a low-top that afforded the wearer more agility than the boot-like cleat still worn in Europe at the time.

The design of cleats is always aiming to perfect the trifecta of protection, performance, and style. While the boots of yesteryear definitely provided protection to the wearer, they left a lot to be desired in terms of performance (and arguably also style). As focus shifted to these slipper wearing South American soccer players, the industry’s focus shifted from a protective soccer boot to the agile low-cut. 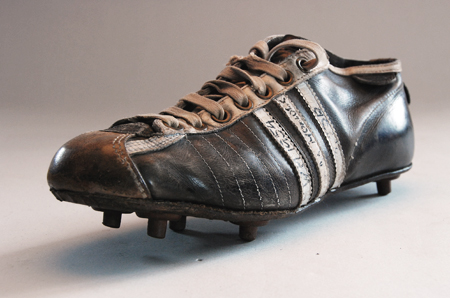 In rugby however, due to the high physicality of the sport, protection remains an important design aspect. Whereas ankle protection in soccer cleats has virtually disappeared, rugby cleats retain their traditional high-level of ankle protection as well as an overall heavier duty construction. Similar to American Football players, rugby players will opt for cleats according to their position, with props and forwards opting for the protection of traditional rugby cleats while those playing attacking positions often opting for the agility offered by soccer cleats.

The dawn of low-cut uppers in soccer and even rugby reflects an overall focus from the 1940’s onwards on making all cleats lighter and more flexible in order to make players faster and more agile.

Light-weight cleats were largely made possible by material and production developments. Synthetic materials allowed for the entire cleat to be lighter in weight, but also stronger and with improved traction. Remember, earlier cleats were often made entirely out of leather: uppers, soles and studs. While real leather cleats absorb moisture during use and therefore become heavier, water resistant synthetic materials remain light-weight. Therefore, despite the heavy-duty construction of rugby cleats to provide protection to players, a shift to steel and aluminium studs as well as synthetic soles also decreased the weight of rugby boots. In soccer specifically, the shift to synthetics have sped up the sport itself since players and the ball itself are no longer weighed down by heavy and rain or sweat-soaked clothes and cleats.

The use of synthetic materials in the sole of cleats was developed from 1954. Nylon was used in the cleats pictured above left worn in the 1958 World Cup. The nylon used in those soles, although light-weight, saw some cracking due to limited flexibility. In order to increase flexibility, material and design changes were made. Nylon was replaced by or mixed with more flexible plastics like polyamide or polyurethane. Structural changes included reinforcing elements and resilient moulded bodies that brought the springy and elastic properties to the sole. Injection moulding techniques adopted in the 1970’s also allowed for the replacement of leather or wooden studs with abrasion resistant synthetic alternatives.

Leather was not entirely forsaken however, with the upper of both Adidas’ and Puma’s most popular soccer cleats being made with leather, the 1979 Copa Mundial and 1966 Puma King, or kangaroo leather in the case of the Copa Mundial. Cleat weight hit a new and desirable low with one of young Nike’s first forays into soccer cleat design: 1998’s Nike Mercurial with a weight of only 200 grams. The Nike Mercurial was also the first high-quality cleat designed in synthetic leather. The top (soccer) cleats producers on the market today – Adidas and Nike – both produce high quality cleats with synthetic rather than leather uppers.

The industry’s move to lighter designs was not without opposition at first. Some players clung onto their increasingly old-fashioned heavy boots, preferring the additional power in their kicks afforded to them by their heavier soles. Many more players preferred the new lighter cleats, crediting them for being able to run faster and having better ball control.

The Importance of Kicking

Something American Football, Soccer and Rugby all have in common to a greater or lesser extent is the need to control and kick a ball with your feet. A design requirement that can be tossed out of the window where cleats for Ultimate are concerned, but a design consideration of critical importance to the three other sports.

In American Football, players used to kick the ball with their toes in a “straight-on” style and the cleats kickers wore reflected that kicking methodology: the toe of their kicking cleat was squared-off rather than rounded. As soccer started to become better known in the United States, a soccer style kicking methodology started to seep gradually into American Football. Despite widespread skepticism about this new fad, soccer style kickers slowly started to prove themselves over their straight-on kicking counterparts and thus the square-toed kicker shoe also fell out of favor. Straight-on kicking has disappeared from the NFL, but a few straight-on kickers still remain active at a high school and even college level. And those squared-off kicker shoes? Fear not, those too are still available; like The Strider Square-Toe Kicking Shoe pictured below. 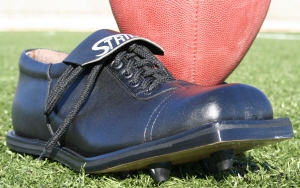 Naturally soccer cleats also experimented with improved ball control and kicking ability, but their focus was entirely on the upper. Former player Craig Johnston spent a significant chunk of the 1980’s developing an improved sweet spot with which players contact the ball when kicked, initially by attaching ping-pong bat material to the upper of cleats. The results of his prototyping were eventually purchased by adidas and brought onto the market in 1994 in the Predator, a cleat specifically designed to improve power, control, swerve and accuracy. The Predator was fine-tuned repeatedly by adidas over the next two decades and was rebooted just last year, although the sweet spot’s fins have altered significantly in the process.

Antoine, the designer with whom we collaborated on the design of our Ultimate specific cleats, was in fact part of the design team of the adidas Predator Accelerator. Those cleats were released for the 1998 World Cup held in France and were worn by French player Zinadine Zidane. Zidane scored twice in the final, helping to secure the host nation’s 3-0 victory over Brazil. Antoine must have been exceptionally pleased when the cleats he helped design won France the World Cup.

Despite the success of the Predator in its many iterations and the fact that cleat design can considerably affect the kicking speed and accuracy of cleats, many soccer players do not rank kicking speed and accuracy as important factors in cleat design since many do not realize the impact design can have on these factors. And as far as Ultimate Frisbee is concerned, those aspects are not relevant anyways… moving on!

So far within their history, cleats have undergone significant change. Morphing from a heavy leather workboot (those steel capped toes definitely weigh a little something) to an increasingly lightweight, synthetic and sport specific piece of performance footwear. More change was still to come.